As I have mentioned a couple of times, last week I was lucky enough to go to Cardiff for the day with my friend Richard. He won tickets to an exclusive screening of The Angels Take Manhattan, the final episode in the current run of Doctor Who. It aired on Saturday night, so we got to see it a full three days earlier than most other people! If I hadn’t been so busy, I’d have done a blog post before Saturday night, in order to get in a little bit of light hearted bragging. As it was, I was super busy, and the bragging was confined to Twitter and Facebook.

As well as the screening, we got to take part in a Q&A session after the episode with Caroline Skinner (executive producer of Doctor Who), Nick Hurran (director of the episode), Michael Pickwood (production designer), and none other than Mr Steven Moffat himself!

We took advantage of being in Cardiff to spend the afternooon there and have a look around. If you are a fan of Doctor Who, Cardiff is great, because just about everything is filmed there, so there are familiar locations around every corner. I didn’t take half as many photographs as I should have done, but the way I see it is that I have a perfect excuse to go back.

We parked just around the corner to Torchwood, also known as the Millennium Centre. I know it’s probably totally sad, but it was such a thrill to see the real life places and know that the actors have actually stood there, where I was standing.

We had to have a photo on the pavement slab that turns into the Torchwood lift. Richard was a bit embarrassed about being such a tourist, and a geeky one at that, but I wasn’t terribly bothered. The locals must be used to it!

~ Screenshot from Everything Changes ~

I’m really annoyed that we didn’t get a photo of us actually leaning on this railing, because it’s the exact place that David Tennant, Freema Agyemen and John Barrowman stood at the end of Last of the Time Lords. We stood there for ages, chatting, and acknowledged that whilst Tennant and Barrowman were probably leaning comfortably, like Richard, Freema was probably much less comfortable, being much shorter, like me. 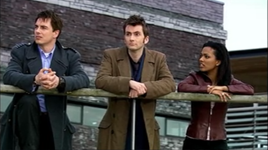 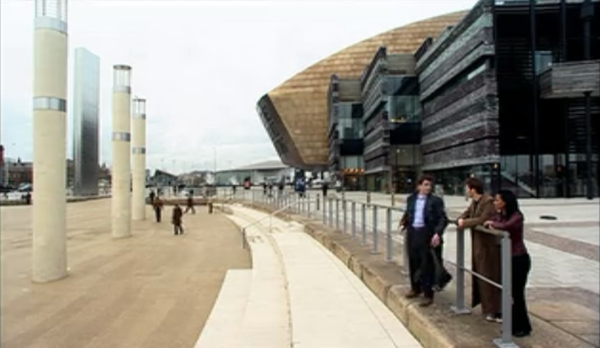 ~ Screenshots from Last of the Time Lords ~

As well as the Millennium Centre, we also went to the Cardiff Bay area, where there are loads of restaurants. A lot of them have been seen in both Doctor Who and Torchwood. We saw the diner from The Impossible Astronaut; it’s bizarre to see it on a rainy Cardiff street when in the episode it’s on the edge of a desert! We didn’t eat in there, because frankly it didn’t look all that great, and I forgot to take a photo! I’m going to have to make a list for the return trip!

We also walked down the street where Astrid (played by Kylie Minogue) and the Doctor land in Voyage of the Damned. Richard, being the big old gay that he is, was ecstatic about the idea of standing where Kylie had stood. I was too, but I also thought it was pretty cool that the legendary Bernard Cribbins had been there.

As for the screening itself, it was amazing. Before it started it was introduced by someone from Bafta Cymru. She apologised for Matt Smith not being able to be there, which frankly I was thankful for, or I probably would have embarrassed myself. Obviously everyone (or mostly everyone) has seen the episode by now, so you know what happened. If you haven’t watched it, stop reading, because I’m going to talk about it!

I started crying when Rory and Amy were on the roof, and I didn’t stop. I knew that I was going to cry, I promised Richard I wouldn’t embarrass him, and I don’t think I did (I am very quiet when I cry in public places). The panel watched the episode with us, which means that I can show off about having watched an episode of Doctor Who with Steven Moffat forever. And I will. You have been warned. I did love the episode, even though it was the end of my beloved Amy. I thought it was a great way to end it though, because although they aren’t dead, they are essentially dead to the series. I thought Matt Smith was terrific, as ever; I felt his pain, as I too, hate endings.

Then afterwards, the panel answered lots of questions about the episode and the series. Most of the questions were good questions, but there were a couple that were just ridiculous. One man actually referred to Steven Moffat as The Moffmeister, TO HIS FACE. Cue me dying of second-hand embarrassment and trying hard not to laugh my head off audibly. 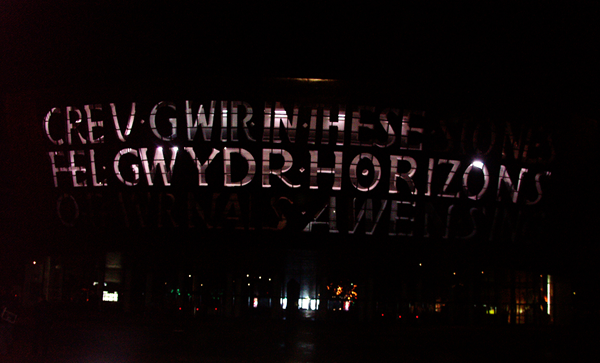 As we walked back to the car, we tried not to see Weeping Angels round every corner. A couple of flickering lights and a massive head laying on the ground had us worried, but we made it back to the car still in 2012.

We did see the coolest roadsigns ever though. I might want to live in Cardiff.

So, as well as having the best day out with my GBF, and getting to see The Angels Take Manhattan before anyone else, and getting to see lots of Doctor Who and Torchwood filming locations, I also got to cross another item off my 30 Before 30 list! I went to Wales!

11 thoughts on “Hello old friend, and here we are, you and me, on the last page”